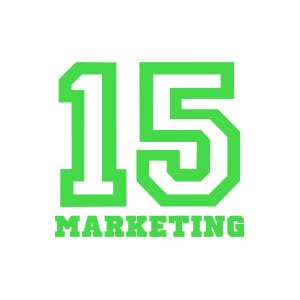 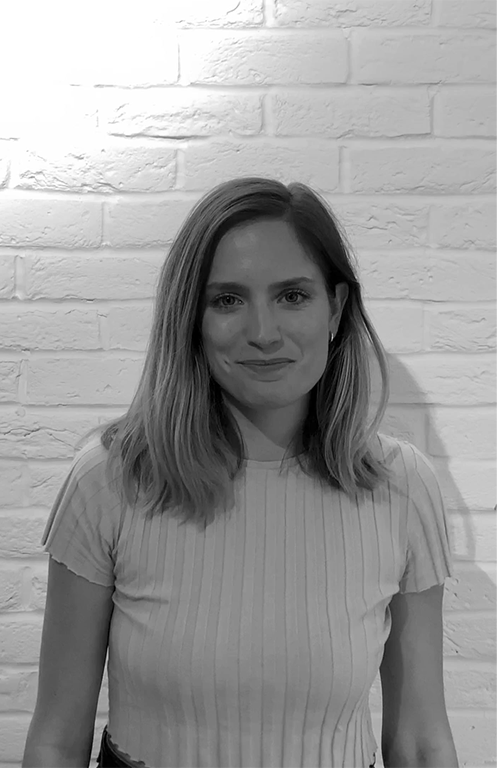 A CULTURE-FIRST SPACE FOR A HYPER-GROWTH COMPANY

This story begins with an innovative marketing agency, a fast-growing team and over a decade of success. Their existing office space had officially got snug, and an upgrade was long overdue. Specialising in marketing for the online gaming sector, the company had only seen further success during the pandemic which meant that in early 2020 they moved from a tight space that squeezed in 18 (at a push) to a 9,000 sq ft blank canvas which we helped to make a modern, stylish and fun place to suit their growing needs.

From pitch to completion, every stage of the project was in the midst of the pandemic which brought its own challenges.

Thankfully, Thirdway’s project team handled things seamlessly and adapted plans such as ensuring the floorplate was spacious enough for social distancing. When restrictions were lifted in summer 2020, we held a collaborative workshop at Thirdway HQ and relished the opportunity to be face to face, get under the team’s skin and develop design ideas and some special creative elements.

As we then continued to dip in and out of national and local lockdowns, ongoing communication with the client continued over Zoom, with the addition of a few socially distanced site visits when permitted.

Presented with an intentionally spacious 9,000 sq ft blank canvas to work with, the possibilities of what we could create were endless. Fun was at the forefront of this brief. We needed to create a space that emulated the excitement of the tech-inspired, 15 Marketing brand whilst introducing playful elements that align with their love for gaming and allow their culture to shine.

You can’t miss the giant 15 Marketing logo behind the reception desk – the neon light encased in 3D lettering has maximum impact as soon as you step in the door.

Separated by floor to ceiling Crittal-style glass partitions, the games room is visible from the front of house but also tucked away. In here you’ll find a pool table, ping pong table and even a specially designed corner fit for a game of petanque (similar to bowls to save you a Google). The stunning giant arched industrial windows mean natural light floods right through this unique spot and into the breakout area.

With so much space to work with, plus employee wellbeing being a top priority for the client, a huge breakout and open kitchen area were factored into the floorplan, becoming the beating heart of the office.

This space truly is all about bringing the team together and allows 15 Marketing’s culture to thrive. Employees can utilise the space to hot desk, collaborate, enjoy lunches and so much more. The giant bleacher merges into bench seating that runs the entire length of the room. A living moss wall at the top of the bleacher brings life and softness, as do the integrated timber planters filled with greenery behind the end-to-end benched seating. The large built-in presentation TV is the icing on the cake to make this the ideal place for an all-hands company meeting or an exceptional space for events.

The kitchen boasts a moody, modern colour palette with impactful black walls and dark green finishes on the cabinets. The white and green patterned splashback is playful whilst the light marble surfaces keep things sophisticated. There’s more than meets the eye with the low-hanging brass lights over the central island as they cleverly double up as heaters to keep food warm when laid out for the team - something that the 15 Marketing team are treated to on a daily basis from their in-house chef. The commercial kitchen is where the culinary magic happens, hidden away from view but an important consideration from the outset.

Elsewhere, you’ll find a variety of working areas to pick and choose where to work from. Take a swift right after the breakout and you’ll be met with a walkway that has two meeting rooms, appearing to mirror one another on either side and the main boardroom at the end.

The twin meeting booths built into the opposite wall are space-savvy with a relaxing, pistachio green contrasting with a bold, contemporary terracotta. The modern circle lights act as a subtle central feature and compliment the overall aesthetics.

Head deeper into the office and you’ll arrive at the fixed desk and hot-desking area. Future employees of 15 Marketing need not worry when it comes to wellbeing at work as there’s plenty of natural daylight and an array of biophilic elements throughout. Tucked away within the walls are more call booths and pods, factored in to suit the growing need for virtual meetings.

If you’re looking to take a break in a quiet spot, grab yourself a book from one of the many bookshelves and make your way into the Moroccan inspired zen room. This tranquil space boasts more rich and cosy terracotta on the walls and ceiling. Organic materials such as wood and Jute make an appearance, in addition to greenery, and bohemian furnishings like rattan lampshades and patterned pouffes as chosen by Tribe.

While you’re kicking back in here, you could easily be mistaken for feeling as though you’re somewhere far more exotic than Hertfordshire.

Storytelling plays a monumental role in this office. From statement nods of inspiration to more hidden elements, all equally unveiling the quirks, passions and playful character of 15 Marketing. Their mini mascot, Jumpman, makes a regular appearance throughout, within artwork or in figurine form peeking out from shelves or guarding tables.

If you’re into your musicals, then you might already know the inspiration behind the boardroom design. Yes, it’s Hamilton. Various concepts were depicted from the film, reflecting the unique contrast of old and new, traditional theatre and hip hop. A ripped wallpaper graphic was developed using old world maps of the Americas as voyaged by Alexander Hamilton, with the ‘15 Marketing green’ bringing it right on brand.

Next door, in Billionaires, the theme lies in the room name. The branded banknote wall graphic includes tiny icons that relate to the company’s history and personality, bringing some nostalgic magic to the space.

The Director's room is named after the late Kobe Bryant and is a unique tribute to the iconic basketball player. The vinyl wall has been built up with a number of layers, each one telling a story in itself.

Basketball fan or not, there’s no denying that this room represents a wonderful collaboration between a passionate client and Thirdway’s creative team.

We can safely say that we aligned from the outset with our shared passion for creative thinking and desire to do things differently. 15 Marketing’s new home is bold, playful and completely reflective of their brand and culture. The abundance of space and well-considered floor plate will support the company’s future growth plans, allowing them to get another decade of success under their belts and attract the very best marketing talent in the process.

Existing, long tenure employees have hand-painted pictures on the hallway walls. Stay with this company for five years and your own portrait will be up there too. That sounds like an incentive to us! 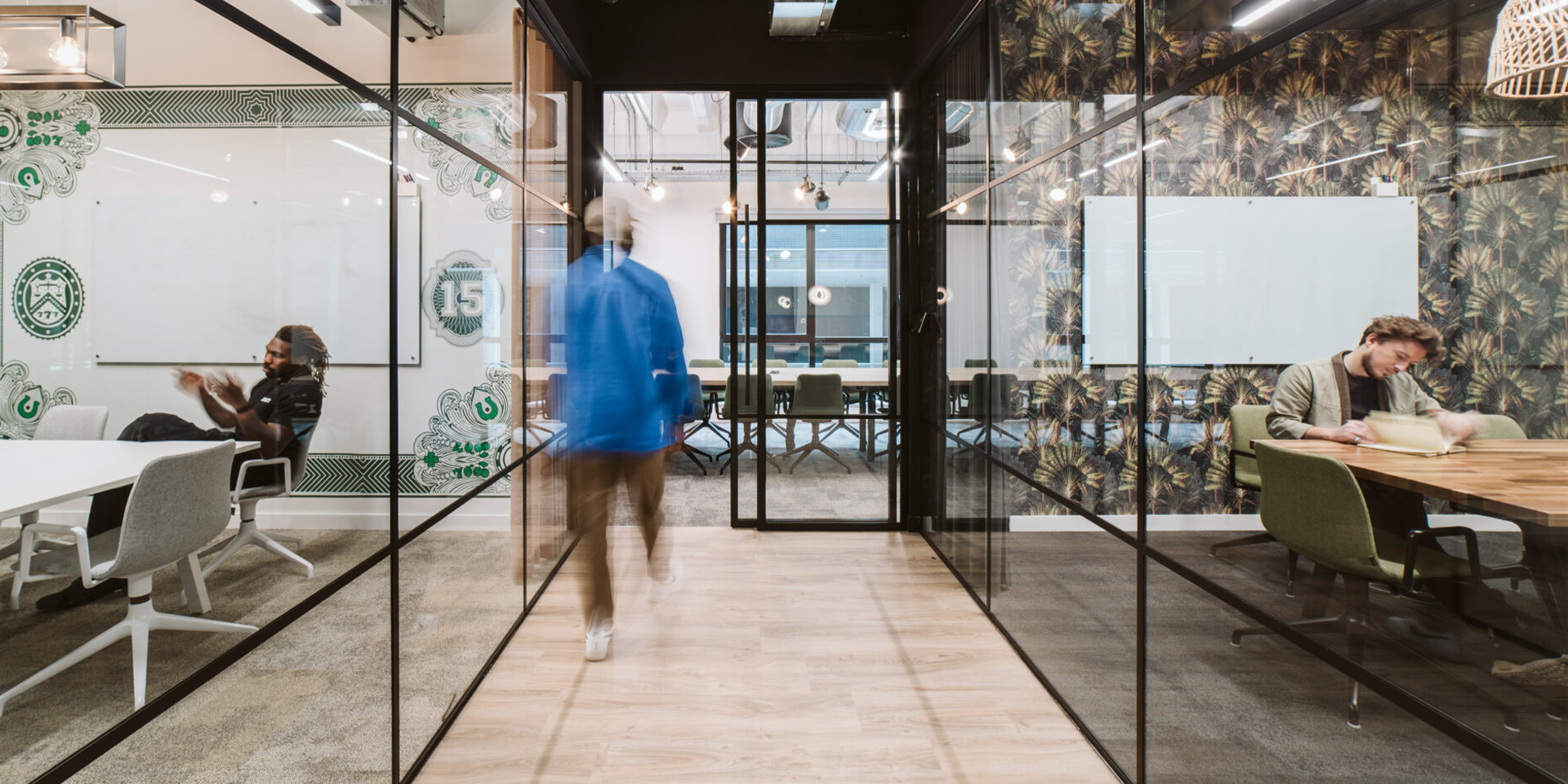 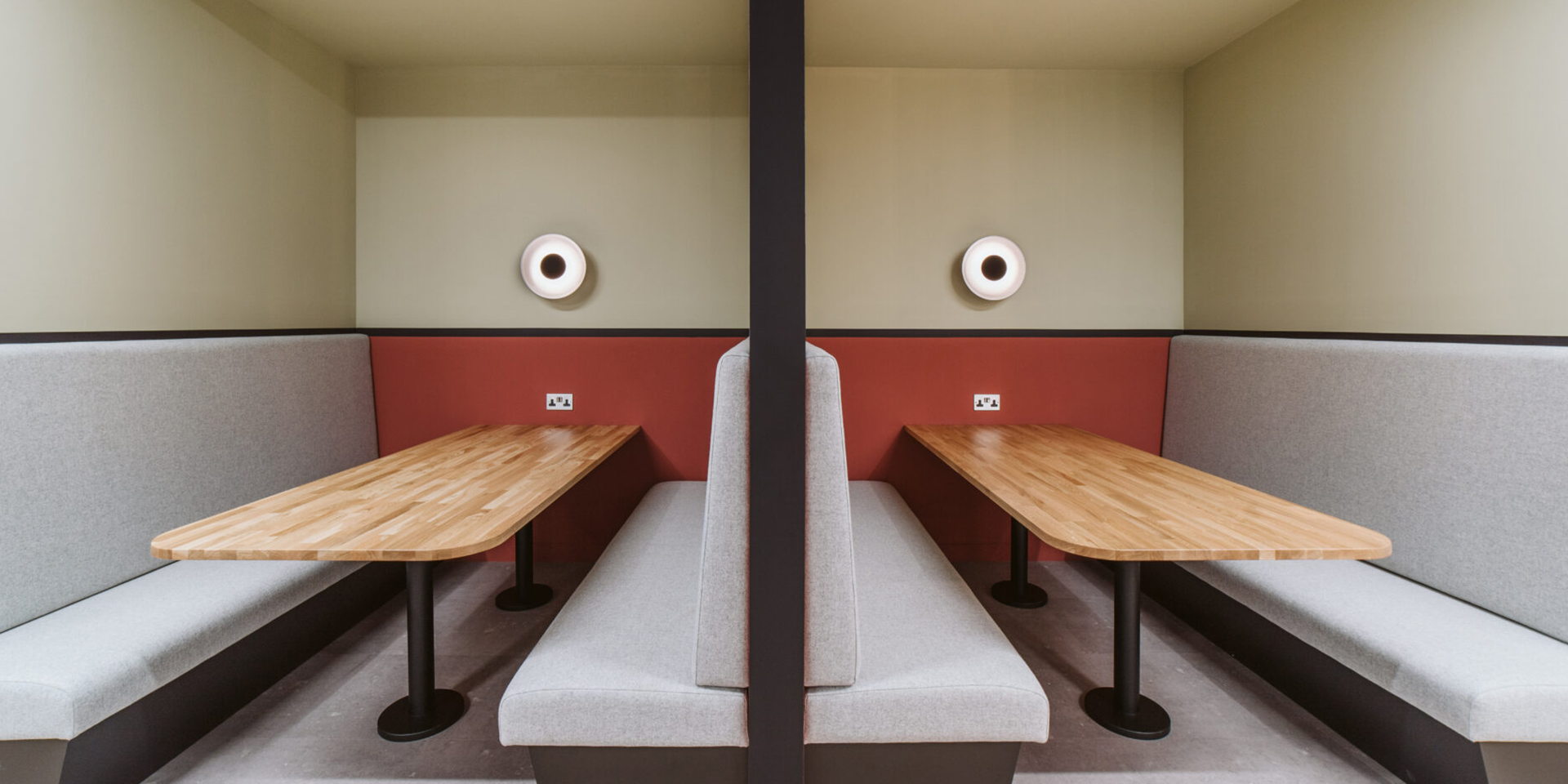 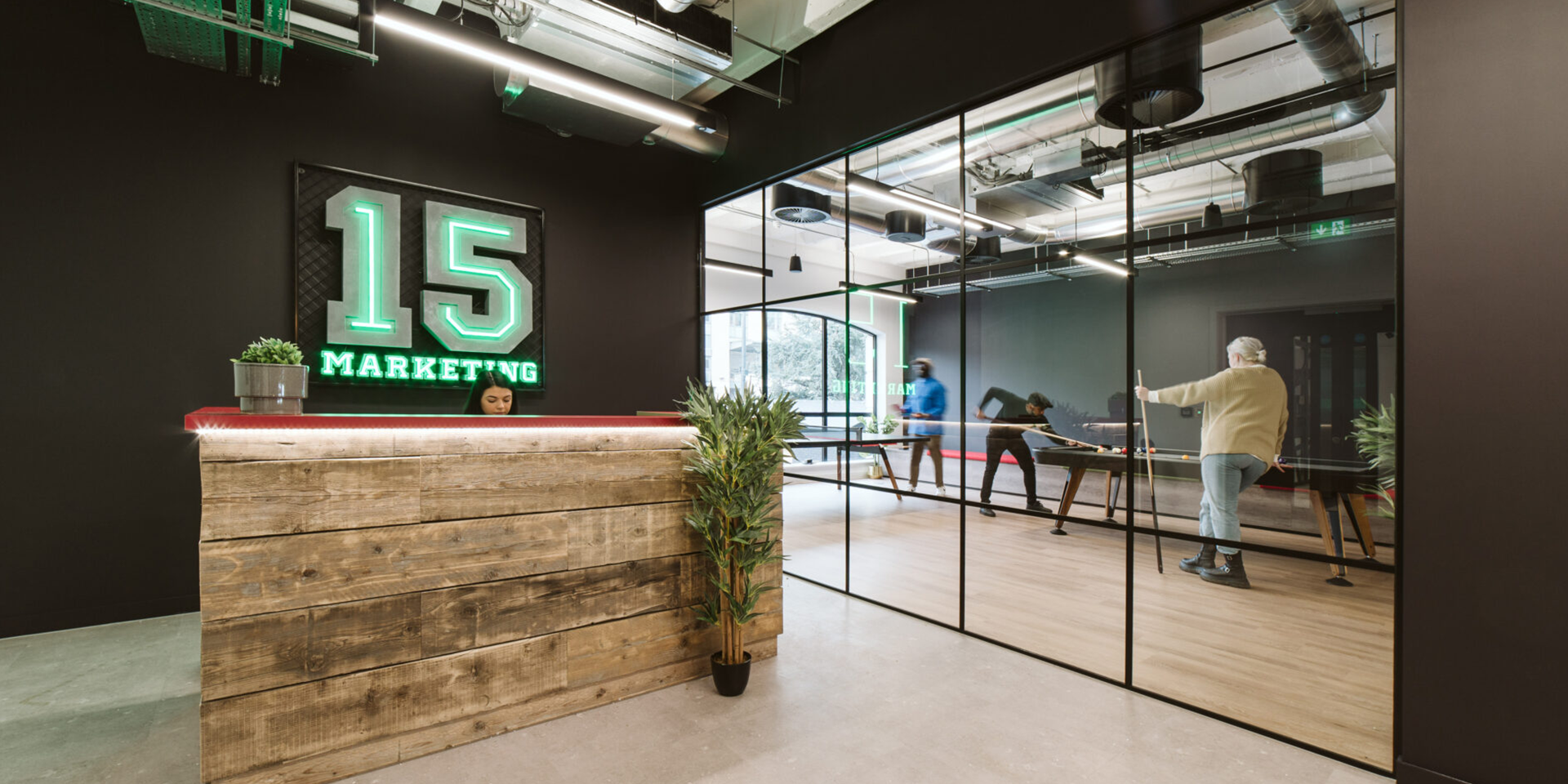 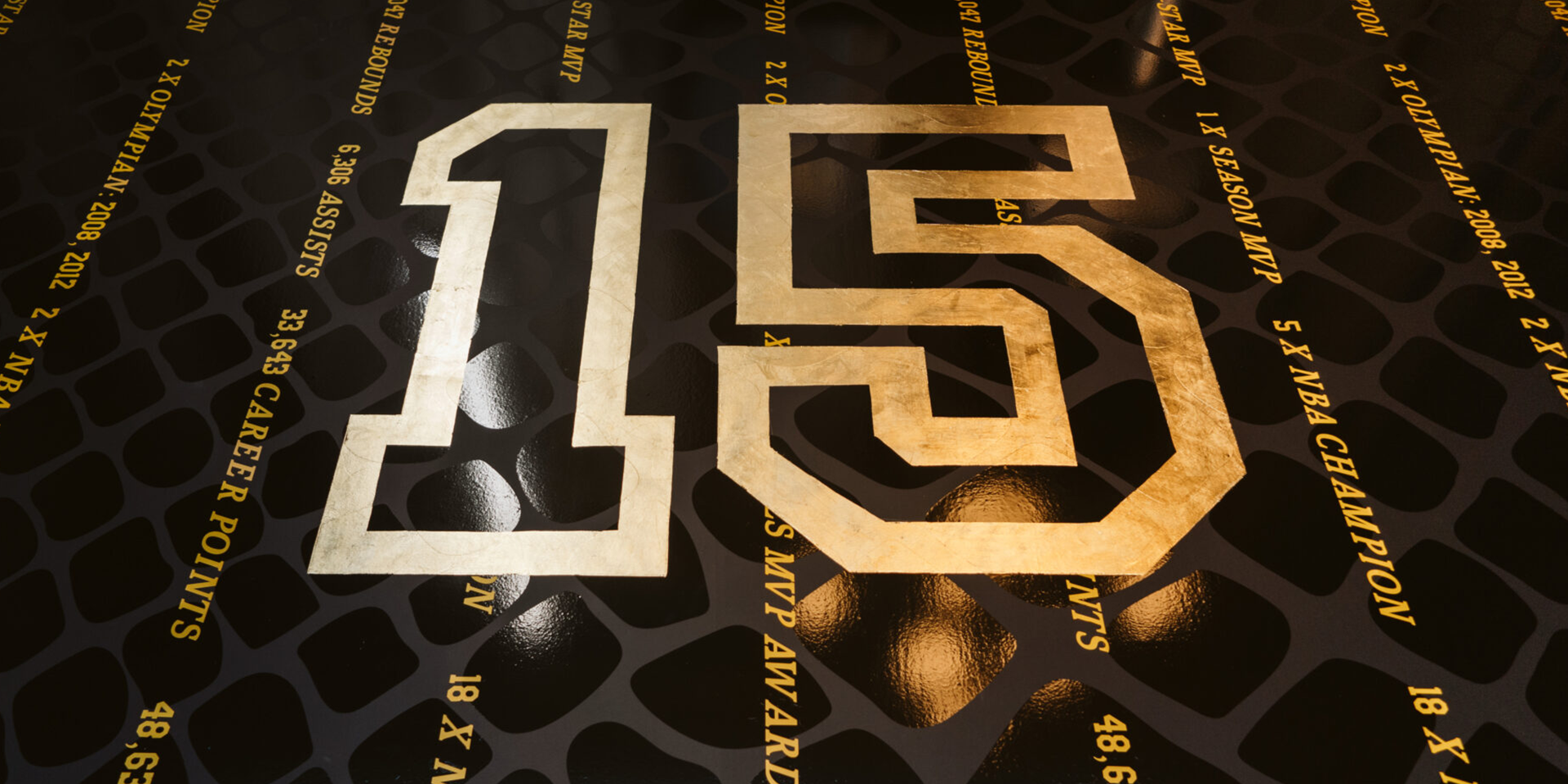 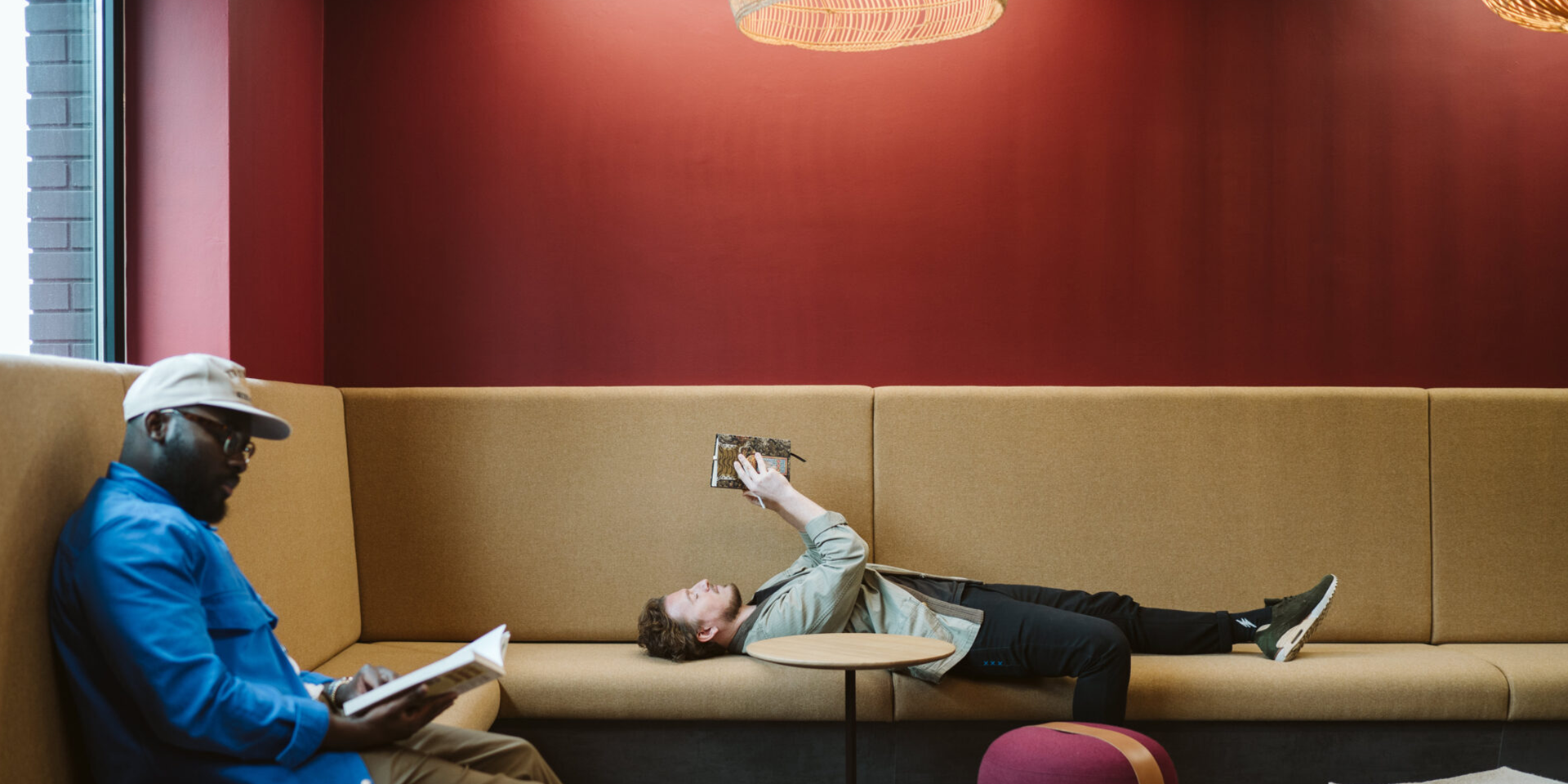 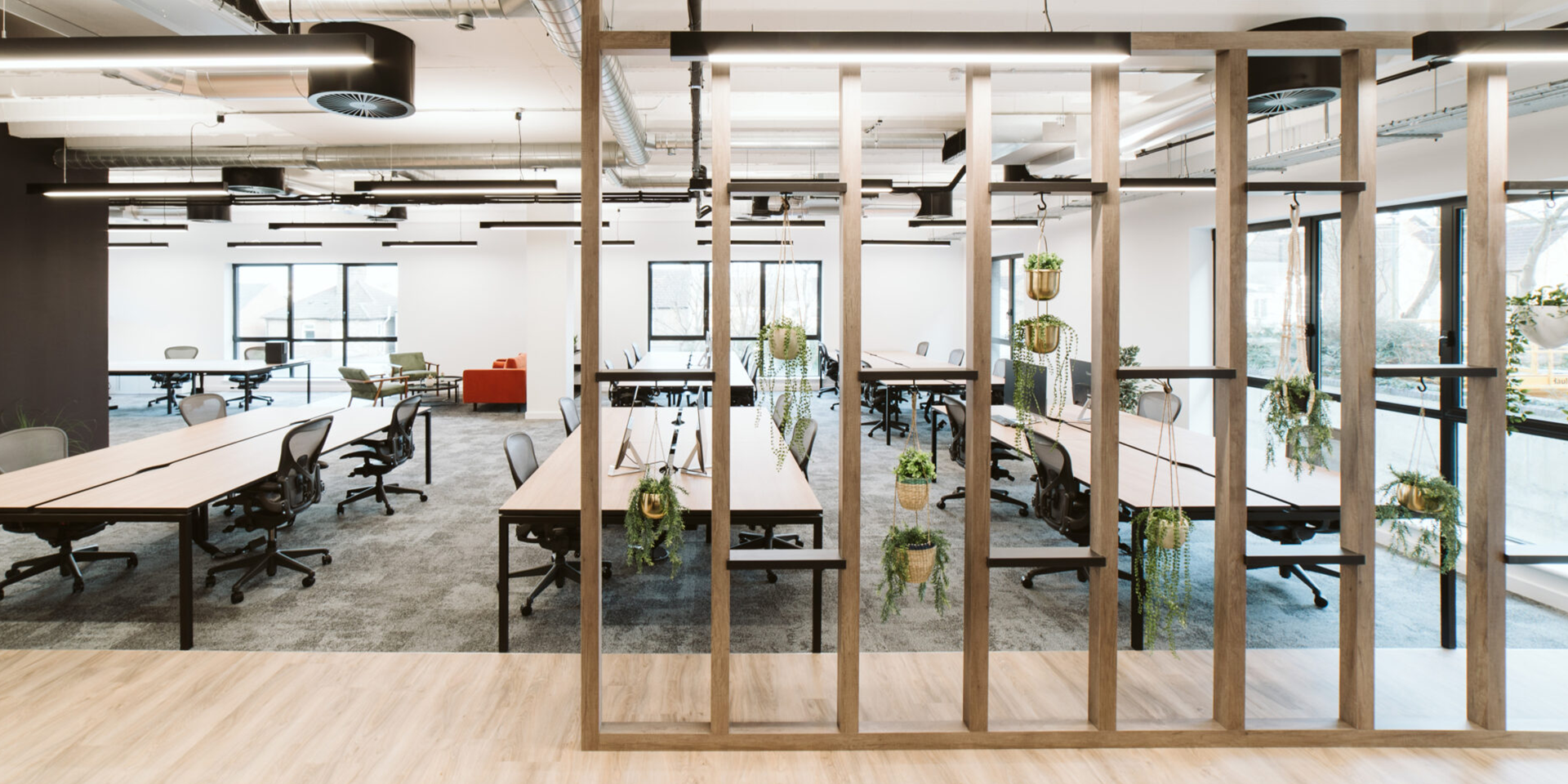 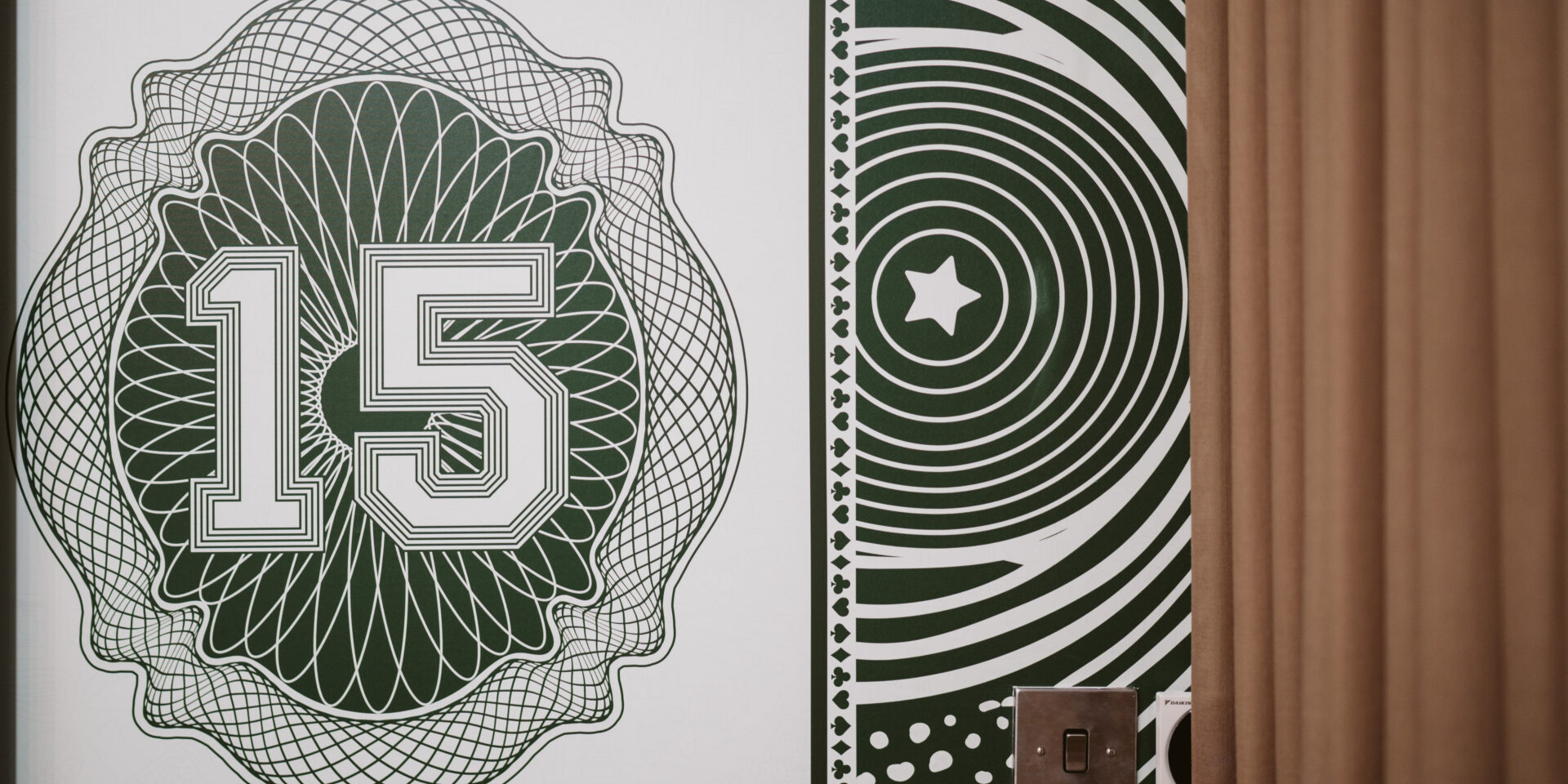 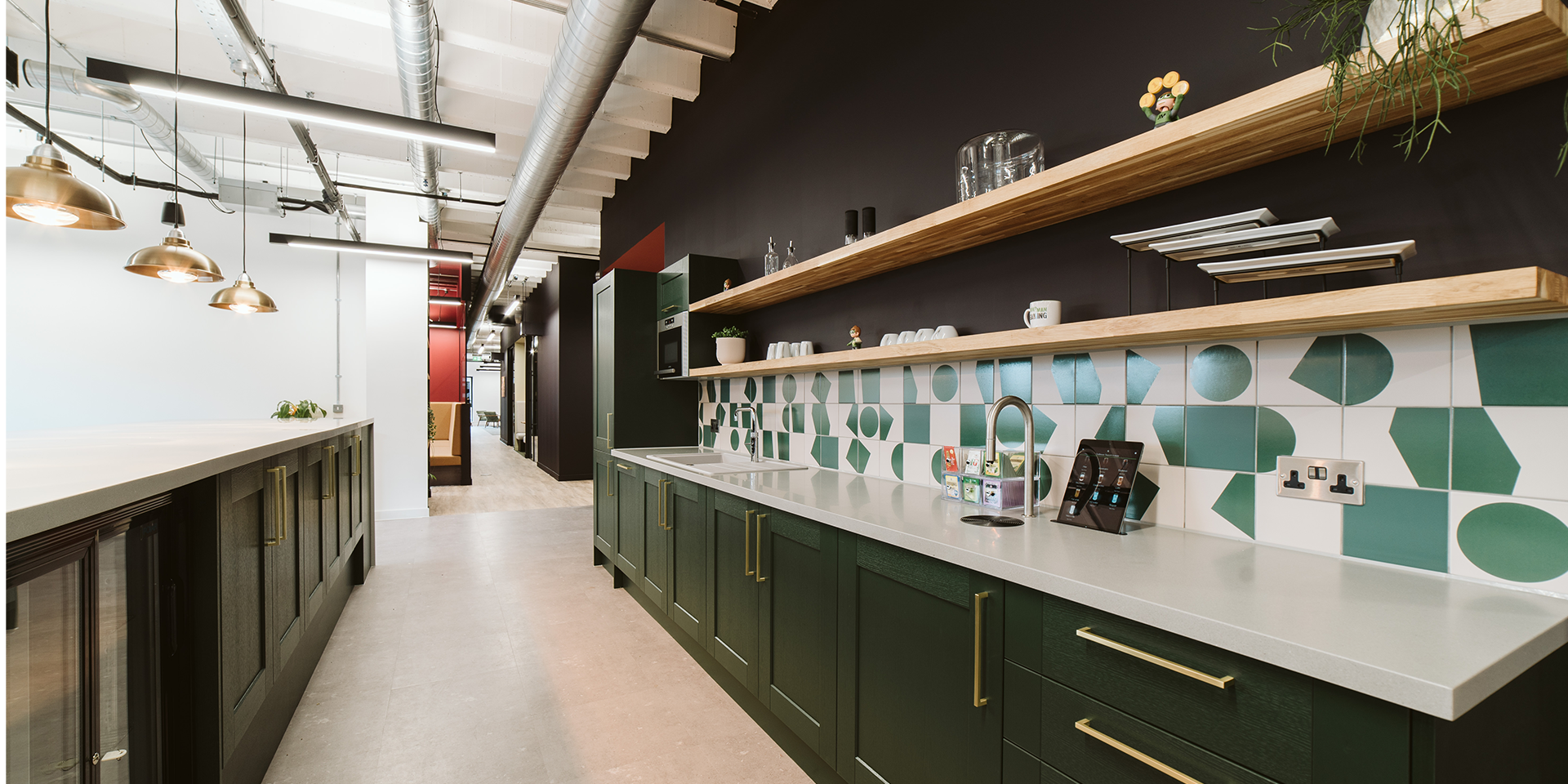 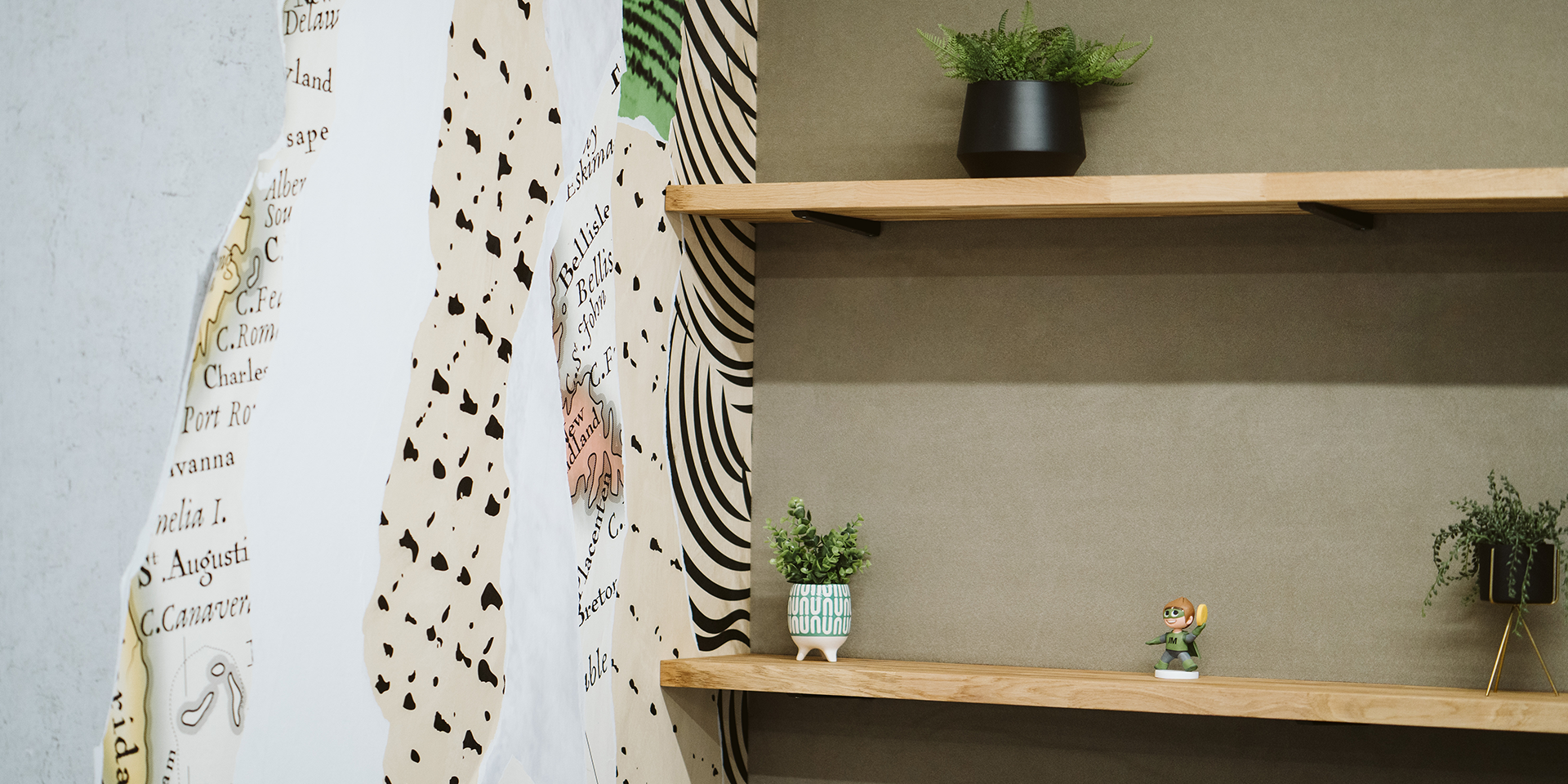 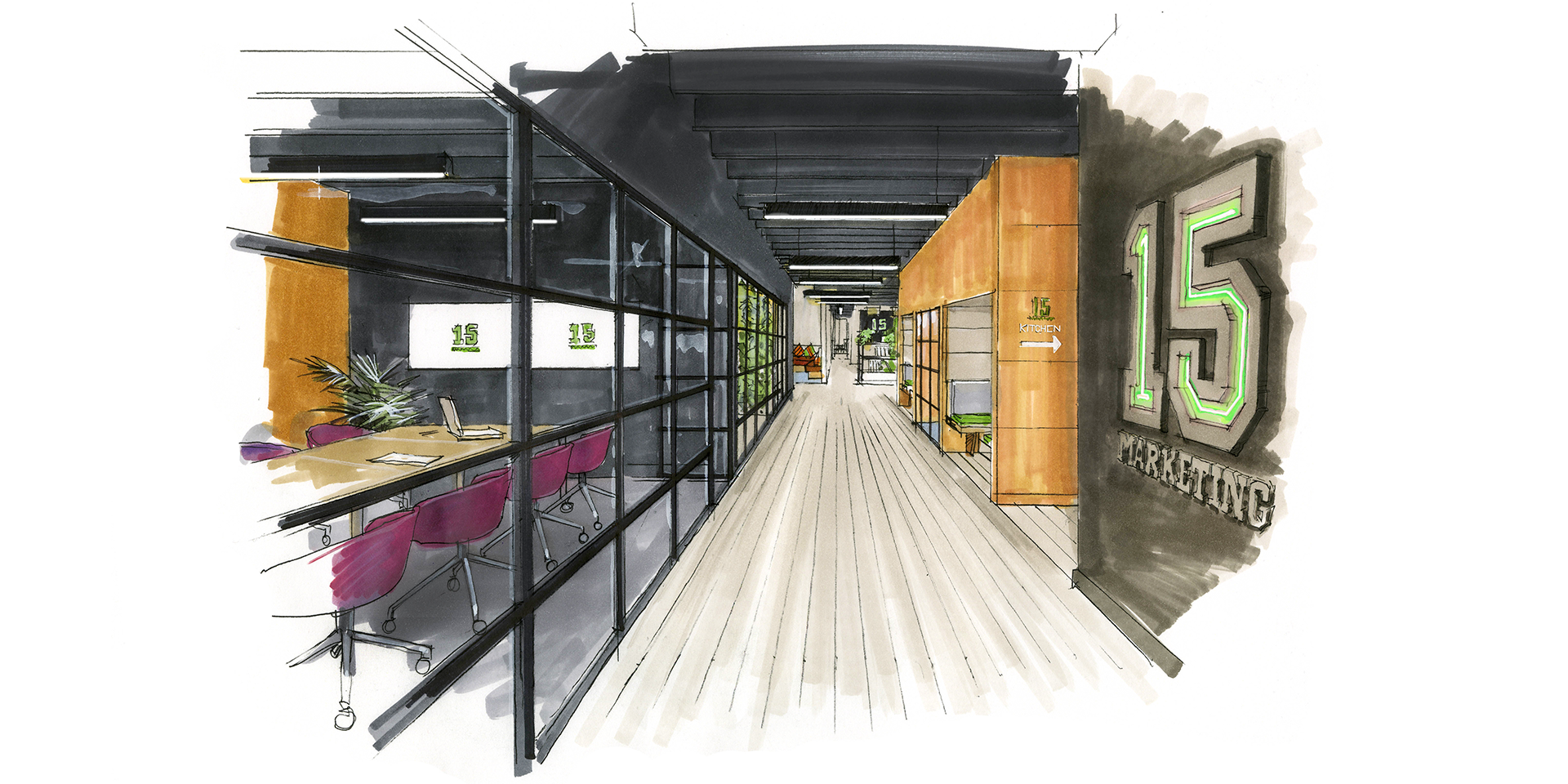 Your office: Stay or go?